We love all most everything about the 80s; Knight Rider, The Goonies, Commodore 64’s, Marathon chocolate bars (now the Snickers) which were 28% larger back in the 80s may we add. Even the fictitious, United States Army Special Forces unit… the A TEAM! From the epic mullets to the big-haired teens emoting teen angst in pastel clothes. The 80s rocked! 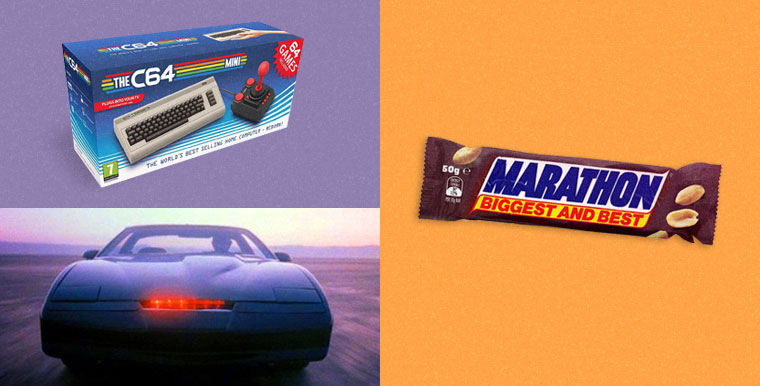 It’s a regular occurrence that some sort of 80s influence or discussion is taking place in the office. Take 80s films… whilst they’ve got this weirdly terrible reputation (shocking I know), we believe they’re kick-ass in comparison to most of the junk we endure today. Plus! You don’t get the brilliant catchphrase’s, such as “Wax on, wax off”, “HEY YOU GUYSSS” or Remember “Boys, no points for second place” or “I ain’t got time to bleed”…. we’ll let you guess the films.

OK, OK… so we aren’t all prancing around the office attempting to do the moonwalk or spending hours glued to a Commodore 64 (although we do have a functioning Amegia, Game Gear, and NES in the office). We’re not even sure if the old-school classics like Desert Strike, Outrun, or Double Dragon would even have a chance of holding up against games such as Red Dead Redemption nowadays. Although, we have to say that sometimes we miss the happier, simpler times playing Super Mario Bros and just watching two badly drawn wise guys having to run away from dangerous mushrooms. We have however recently been enjoying an increase of 80’s nostalgia that we’ve been seeing coming through in design, tv and music.

Stranger Things, for example, the hit Netflix series absolutely oozes 80s nostalgia. The creators were quoted saying that 80s films heavily influenced the series itself and we think that’s quite obvious to see. Take the film The Goonies, you’d be blind to not see the similarities between The Goonies and Stranger Things. Not only does the film actually revolve around a group of young kids going on adventures with one another but Stranger Things’ Barb appears to be styled directly after The Goonies’ Stef. Right down to the glasses!

We also regularly listen to a band called Gunship. They bring to the table Synthwave; a genre of electronic music influenced heavily by 1980s. The bands’ co-founder Alex Westaway, told The Verg that 80s nostalgia was a huge inspiration for the group. This is clear with some of their songs that have a nostalgic look back at cyberpunk with songs like “Cyber City”. They’ve even released a cover of Cyndi Lauper’s 1983 song “Time After Time”! Not only this but the bands’ videos feel like throwbacks to films such as Blade Runner and Terminator 2, often using films or animation of the era.

We’re not saying bring the 80’s back but rather paying a homage to the things we know and love. With that in mind, we’ve designed, curated and created a number of things all in an 80’s style.

Our Christmas card, the three wise men, reimagined as our favourite childhood supercars navigating their way towards the star. 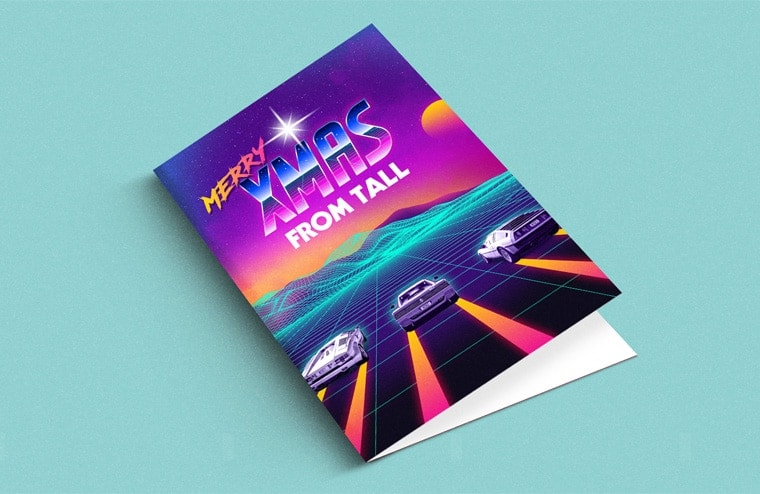 To go with this, we created a “making of the Tall Christmas card” video to show you the process agencies went through back in the day using good old desktop publishing techniques. The video features all things 80’s including people, cars (can you guess which one?) and awesome wigs.

Making of the Tall 80’s Xmas card from Tall on Vimeo.

We’ve talked about music here in the studio so we thought it only fair that we gifted you our very own “Best of” Synthwave playlist that can be heard if you’re close by the studio. Obviously, we had to create our very own 80’s album artwork, to make it just right.

We’ve talked about music here in the studio so we thought it only fair that we gifted you our very own “Best of” Synthwave playlist that can be heard if you’re close by the studio. Obviously, we had to create our very own 80’s album artwork, to make it just right.

As a final nod to the decade we love so much, we collated a number of Christmas adverts that we’re sure you’ll remember. Back when the adverts were less about the huge production costs and more about the fun Christmas brings with it.

So sit back and enjoy (we certainly did) as we barrage you with 80’s awesomeness this Christmas.