Climate change is a hot topic right now (no pun intended). It’s hard to ignore the likes of Greta Thunberg and her passionate rant at the UN Climate Summit, or Extinction Rebellion chanting through a megaphone in a massive yellow boat parked down the middle of the road. The messages they’re sending are clear and something we all need to address, but what role does design play in all of this?

On the surface, these two things may seem quite disparate, but this is not the case, and certainly is not something that is only being brought to the table now. The idea of using design as a fuel for good was first raised by British designer Ken Garland all the way back in 1964 when he published the ‘First Things First’ manifesto. This was updated in 1999 and subsequently signed by 22 designers, including some big names like Milton Glaser and Zuzana Licko. Essentially, it argued that design should not just be used to advertise products that satisfy our commercial needs, but rather spend more time focussing on wider issues affecting politics, the environment and so on.

“There are pursuits more worthy of our problem-solving skills. Unprecedented environmental, social and cultural crises demand our attention.” 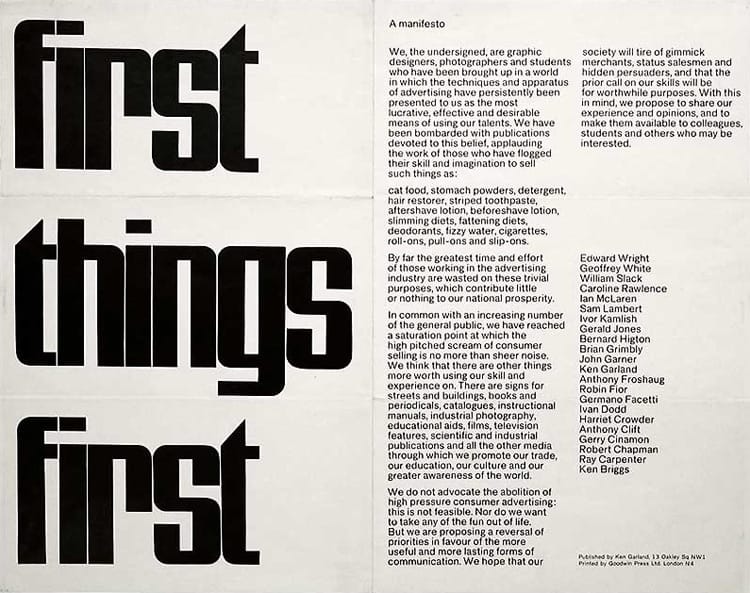 In principle, this sounds great, and something I think all designers would aspire to get behind, but it’s not always achievable. You’re not always able to pick and choose your clients, and we’re certainly not in a position where we can all work solely with ethical, environmentally-conscious brands and products, as brilliant as that would be.

The traditional role of graphic design

Graphic design has always been a tool of communication, a way of delivering a message. It can have a powerful effect and one of the best examples of this is through data visualization. The science behind climate change may not be that easy to comprehend when displayed in a tedious graph or Excel spreadsheet. However, portraying this information in a graphic and often striking way can be far more effective at communicating and resonating with an audience. A great example of this is Ed Hawkins ‘Warming Stripes’, which shows the annual global temperatures from 1850 all the way up to the present day. 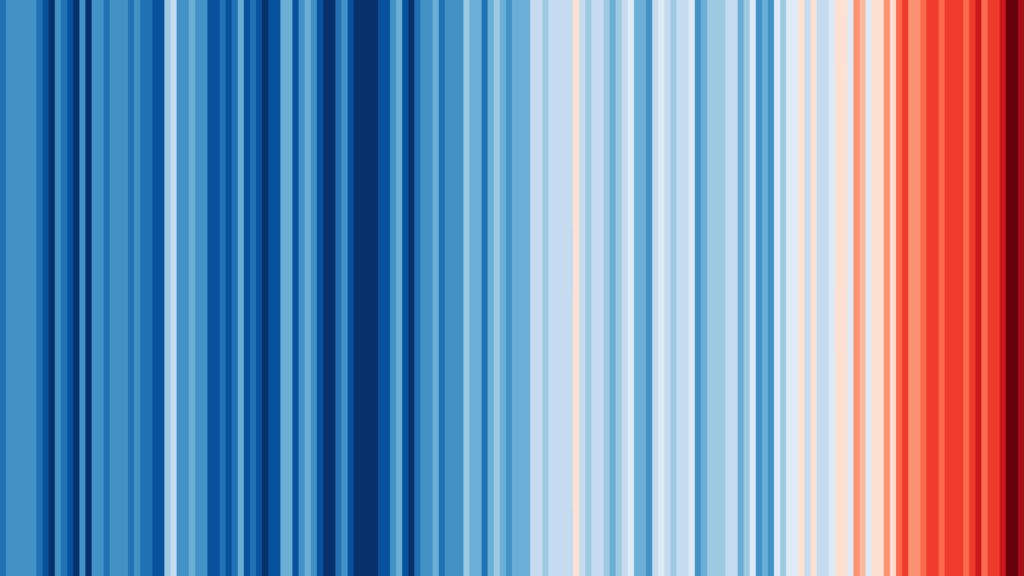 Another good example is by Milton Glaser, who started an excellent campaign a few years ago called ‘It’s not warming, it’s dying’. Again, a very simple visual but enough to make you stop and potentially re-think your actions. 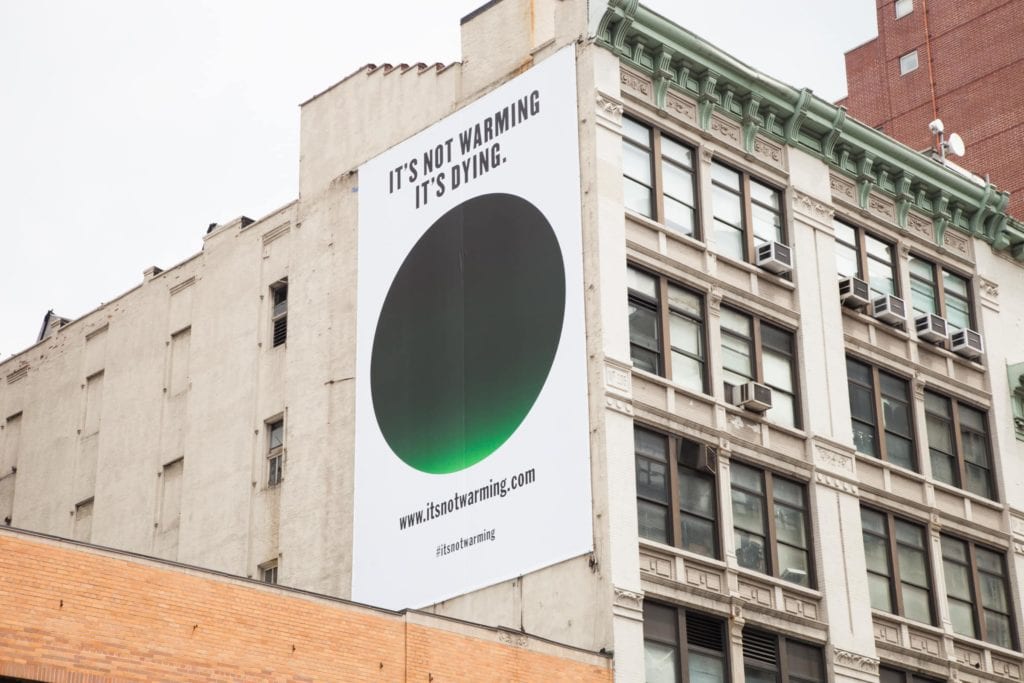 It can be hard to see the impact of our industry, especially when most of our day is spent hidden behind a desk. Having said that, digital technology has already made quite a significant impact on the environment and could cut global emissions by 15% according to the World Economic Forum. The continuing trend of taking physical products into the digital world has helped reduce the amount of physical matter that exists in our actual world. Online shopping and banking apps are making our high streets almost redundant. Most of us now stream our entire discographies through Spotify, meaning there’s no need for physical CDs. And how many of us still read actual newspapers? I mean you don’t even need to waste physical energy on facial expressions anymore. There’s probably an emoji that’ll save you the hassle.

But it’s not all (open hands emoji) and (flexed bicep emoji), as the digital world still inevitably produces a hefty carbon footprint. Not to mention the huge data servers run by tech giants such as Google and Facebook which as a whole is predicted to engulf over 10% of the global electricity supply by 2030.

On a large scale, some would argue that our industry should be at the forefront of designing a better future. One that aims to make our public transport more accessible, the infrastructure of our cities more sustainable and the technology inside of our products more eco-friendly. However, that’s quite a daunting thought, and it is perhaps better to start on a smaller scale to begin with. For example, there are already a few apps out there that can help you reduce your carbon footprint. Car-sharing apps like Liftshare are becoming increasingly popular in a way to cut CO2 emissions and travel smarter. Apps such as Farmdrop can help you get your groceries delivered from independent, local producers who are paid fairly. There’s even an app called ‘Dropcountr’ which lets you see how much water your wasting and set #waterusagegoals.

Finally, there’s a great initiative being run by Glug at the moment called Protest by Design. They’ve put out an open brief where you can create your own protest posters and they’ll be uploaded to a worldwide database, free to use by anyone. Maybe even by a giant broccoli man parading through London if you’re lucky… 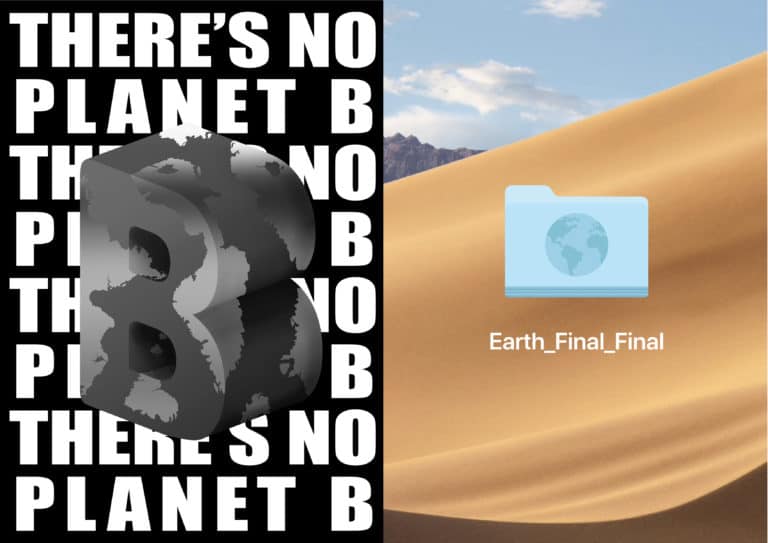 Next article 5G and the potential for advertising